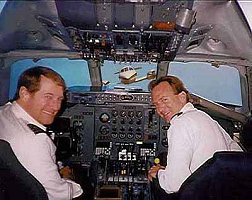 High Anxiety? "Not me!" you might say.
Sure? Wait a minute and read on ....
Ever wondered what tower and pilot talk about on the radio?

These are allegedly genuine radio conversations between aircraft and traffic control

Pilot: Condor 471, I'm waiting for my Follow-me.
Tower: Negative, see yourself how you get to gate one-oh ...

Tower: Have you got enough fuel or not?
Pilot: Yes.
Tower: Yes what??
Pilot: Yes, SIR!

LH741: Tower, give me a rough time check
Tower: It's Thursday, Sir.

Tower: Swissair eight-oh-nine, turn left heading directly for Trasadingen VOR. Do you need a radar vector ?
Pilot: Negative, we are receiving VOR. It's directly where the moon stands.
Tower: I couldn't say, I don't have the moon on my radar.

Pilot: Apron, Interflug 195, requesting start-up.
Apron: Sorry, Interflug 195, we don't have your flight plan. What is your destination ?
Pilot: As always on Monday, we're flying to Leipzig.
Apron: But it's Tuesday today!
Pilot: What? Tuesday is our day off!

Pilot: Tower, there's a runway light burning.
Tower: I'm sure there must be dozens of lights burning.
Pilot: Sorry, I mean it's smoking.

Tower: Lufthansa 893, you're number one, check for workers on the taxiway.
Pilot: Roger ..... We've checked, they're all working.

Tower: Delta Bravo Charlie, your squawk is really seven-zero-four-six?
Pilot: Affirmative.
Tower: I'll send you an excavator, your heigth is minus nine-zero feet.

Tower: Delta Mike Zulu, after landing cleared to taxi Alpha seven, Alpha five, Whiskey two, Delta one and Oscar two.
Pilot: Where the hell's that, we're not that familiar with this port?
Tower: Don't worry. I'm new here, too.

Tower: DE..., turn downwind for runway two-six, you're number two behind a DC-9 turning base leg.
Pilot: DE..., turning downwind for two-nine, following a DC-6.
Tower: Not quite: Runway is two-six, traffic a DC-9.
Pilot: Roger, follow a DC-26 ... what was the runway?

Pilot trainee: Lichtenfels info, DEITN, turning base right for runway two-two for go and touch.
Tower: DEITN, I got a request: Please first touch and then go.

Tower: You have traffic at ten o'clock, six miles!
Pilot: Give us another hint, we have digital watches!

Tower: Mission triple-three, do you have problems?
Pilot: I think, I have lost my compass.
Tower: Judging the way you are flying, you lost the whole instrument panel..

Eggenfelden Info : D-EXXX pls. report persons aboard.
D-EXXX (C-172) : Pilot and two pax and one dog.
Eggenfelden Info (after Cessna finally bounced to a stop): Assume the Pilot-in-Command was the dog ?

Pilot: FLX three-zero, Tower, we're running out of fuel, please advise!
Tower: What's your position, I don't have radar contact!
Pilot: We're lined up for runway two-nine and would like to know where the fuel truck is.

Tower: Hawk 20, is this the same aircraft declaring emergency about two hours ago ?
Pilot: Negativ, Sir. It's only the same pilot.

The following story was told by Salvatore Baia, a pilot who was waiting in his Cessna for take-off clarance one fine morning at Zurich Airport. The situation was this:
Weather: clear, visibility: good. Take-off runway was two-eight, landing runway one-six, alternate one-four.

Tower: Alitalia 194, you are cleared to taxi to runway two-eight; line up and hold. Expect take-off clearance shortly.
AZ194: Ahhh, yes, taxi to two-eight-a and hold-a

... In the mean time: runway one-six had a 737 with a wheel emergency and was blocked. All traffic had to use one-four. An approaching 767 from Cincinnati was guided downwind to land on two-eight. Its crew had been airborne for more than eight hours ...