A question of support 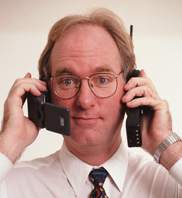 This is computer support inc.
Can I help you?
Befuddled PC users flood phone help lines,
and no questions seems to be too basic ....

The exasperated help-line caller said she couldn't get her new Dell computer to turn on. The technician made sure the computer was plugged in and then asked the woman what happened when she pushed the power button.
"I've pushed and pushed on this foot pedal and nothing happens," the woman replied. "Foot pedal?" the technician asked. "Yes," the woman said, "this little white foot pedal with the on switch." The "foot pedal," it turned out, was the computer's mouse, a hand-operated device that helps to control the computer's operations.

One woman called Dell's toll-free line to ask how to install batteries in her laptop. When told that the directions were on the first page of the manual, says Steve Smith, Dell director of technical support, the woman replied angrily,"I just paid $2,000 for this damn thing, and I'm not going to read a book."

A customer called Compaq's help center in Houston, Texas, who said her brand new Contura would not work. She said she had unpacked the unit, plugged it in, opened it up and sat there for 20 minutes waiting for something to happen. When asked what happened when she pressed the power switch, she asked, "What power switch?"

Another customer called to complain that "The cup holder has broken off my computer. I want a replacement, there still warranty on my machine!" The support technician, completely fazed, asked him "excuse me, did you say cup holder?"
"Yes, it's a little tray, that comes out of the computer and where you can place your cup of coffee. It broke of yesterday. It's a bit of a flimsy thing and I want you to tell me how to proceed to get it repaired".
"Yes, now let us see. Did this thing come as a promotional gift with your PC", the technician asked, "does it have a label or does it say anything on it?"
"Oh, not much", the customer replied, "just the words 20x."
At this point, the technician had to mute the phone. The customer, it turned out, had taken his CD ROM drive for a cup holder.

So many people have called to ask where the "any" key is when "Press Any Key" flashes on the screen that Compaq is considering changing the command to "Press Return Key."

One customer complained that her mouse was hard to control with the "dust cover" on. The cover turned out to be the plastic bag the mouse was packaged in. Dell technician Wayne Zieschang says one of his customers held the mouse and pointed it at the screen,all the while clicking madly. The customer got no response because the mouse works only if it's moved over a flat surface.

A customer was having trouble reading word-processing files from his old diskettes. After troubleshooting for magnets and heat failed to diagnose the problem, he was asked what else was being done with the diskette. The customer's response: "I put a label on the diskette, roll it into the typewriter..."

Another customer dutifully complied with a technician's request that she send in a copy of a defective floppy disk. A letter from the customer arrived a few days later, along with a Xerox copy of the floppy.

The software inside the computer can be equally befuddling. A Dell customer called to say he couldn't get his computer to fax anything. After 40 minutes of troubleshooting, the technician discovered the man was trying to fax a piece of paper by holding it in front of the monitor screen and hitting the "send" key.

No realizing how fragile computers can be, some people end up damaging parts beyond repair. A Dell customer called to complain that his keyboard no longer worked. He had cleaned it, he said, filling up his tub with soap and water and soaking his keyboard for a day, and then removing all the keys and washing them individually.

Computers make some people paranoid. A Dell technician, Morgan Vergara, says he once calmed a man who became enraged because "his computer had told him he was bad and an invalid." Mr. Vergara patiently explained that the computer's "bad command" and " invalid" responses shouldn't be taken personally.

An IBM customer phoned in because he had problems installing some new software. "I inserted the first diskette like it says on the sheet. When it said I should insert the second floppy, I did so, even though it was not easy. Now I'm asked to put in the third one, but I can't put it into the drive. There's no more room!"

I was working for a bigger company when another guy in our (computer) department came into my office in hysterical laughter. He told me he had just fielded a question from a woman whose department had gotten PCs installed two months previously. (Not by our group, we wrote software.)
She told him her problem, and he figured out that a few files were lost from a floppy disk. "Do you make backups?" he asked hopefully.
"Oh, yes, we were instructed to copy all of our data disks every day."
"Well, put the backup copy in the computer, and I'll show you how to restore the files."
"You mean put it in the printer?"
"Huh? Put it in the disk drive."
"How am I going to do that?"
You see, each night they used a Xerox machine to copy their disks, and neatly stored the pictures of each disk in a filing cabinet. My response was to suggest that we fax them a new copy of their disk.