I  n the spirit of Charles Darwin, the Darwin Awards
commemorate individuals who protect 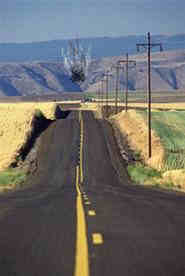 our gene
pool by making the ultimate sacrifice of their own lives.
Darwin Award winners eliminate themselves in an
extraordinarily idiotic manner, thereby improving our
species' chances of long-term survival.

Last year's winner was the fellow who was killed
by a Coke machine which toppeld over on top of
him as he was attempting to tip a free soda out of it.

The Arizona Highway Patrol came upon a pile of smouldering metal embedded into the side of a cliff rising above the road at the apex of a curve. The wreckage resembled the side of an airplane crash, but it was a car. The type of car was unidentifiable at the scene. The police lab finally figured out what it was and what had happened.

It seems that a guy had somehow gotten hold of a JATO unit (Jet Assisted Take Off - actually a solid fuel rocket) that is used to give heavy military transport planes an extra "push" for taking off from short airfields. He had driven his Chevy Impala out into the desert and found a long, straight strech of road. Then he attached the JATO unit to his car, jumped in, got up some speed and fired off the JATO!

The facts as best as could be determined are that the operator of the 1967 Impala hit JATO ignition at a distance of approximately 3.0 miles from the crash site. This was established by the prominent scorched and melted asphalt at that location. The JATO, if operating properly, would have reached maximum thrust within 5 seconds. The driver, soon to be pilot, most likely would have experienced G-forces usually reserved for dog-fighting F-14 jocks under full afterburns, basically causing him to become insignificant for the remainder of the event. However, the automobile remained on the straight highway for about 2.5 miles (15-20) seconds before the driver applied and completely melted the brakes, blowing the tyres and leaving thick rubber marks on the road surface, then becoming airborne for an additional 1.4 miles and impacting the cliff face at a height of 125 feet leaving a blackened crater 3 feet deep in the rock.

Most of the driver's remains were not recoverable; however, small fragments of bone, teeth and hair were extracted from the crater and fingernail and bone shards were removed from a piece of debris believed to be a portion of the steering wheel.

Ironically, a still-legible bumper sticker was found, reading "How do you like my driving? Dial 1-800-EAT-CRAP."

Note: this story is widely held to be apocryphal.

I have heard and seen this story in several places, also on the internet. The original © Copyright of this item lies at Darwinawards.com