Creation of the Computer

I n the beginning, God created the bit.
And the bit was a zero.
And God saw the bit
and saw that it was good. 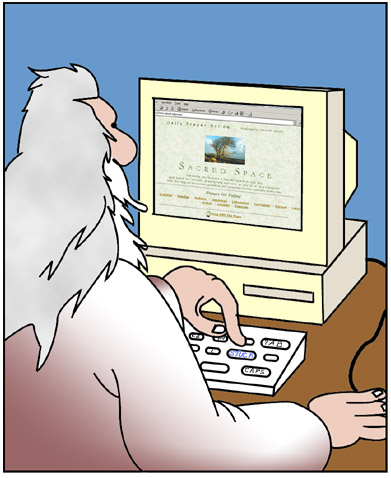 The Gospel according to Gates

The Lord of the OS did come down among His sheep and He sayeth, "Thou shalt pay Bill Gates and he will deliver unto you my product. I am your WinXP, your GUI. Thou shalt not have false GUI's on machines before me."

And the Lord said, "16-bit applications are evil! I am sorry, I ever created them. I shall smite them with my RAM rod and start all over. Thou shalt buy new computers."

And the prophet Intel came forward and said, "But Lord, what about backward compatibility? What about the tribes of the 8086 and the 80386 ?"

And, lo, the Lord became angry and said, "Compatibility is irrevelant. Thou shalt be assimilated."

And the consumers gathered around Bill Gates and the Tower of Microsoft, and they asked, "Prophet, how much must we spend on salvation? Seven times our investment?"

And Bill Gates turned to the crowd and said unto them, "Nay, consumers, not seven but seventy times seven times your investment. Only then shall you be saved."

And the consumers did as they were told. But the product did not work and they grew angry, and they cried out to the Lord, "Lord, we have done as your prophet asked us to do, but the product does not work! Our machines, they run slow! Our applications, they do not run."

And the Lord sayeth unto them, "I tell you this, it is easier for Alice Cooper to enter the Gates of Heaven than for a Pentium to run Windows 95."

And as the masses did come forward, I saw inscribed upon their heads W95, the number of the Bill.

And the Prophet Bill, for that was who it must have been, he raiseth his right hand and broke the first seal, saying "Behold the seal of Microsoft. By the braking of this seal you are bound unto whatever the contract within may say."

And as the seal was broken, all the great empires around the world were set upon with famine and floods and swarms of bugs like never seen before and the great anguish befell them all.

And lo, the Prophet Bill held up the scroll and said, "Behold, the second seal! I shall not break it today, but rather I shall break it soon, like perhaps next week, or maybe the week after. Thou shalt wait expectantly for its breaking, and shall not produce any work until that time shall come."

. Heard any new one lately?
Send it to me, please.

He finds himself in purgatory, being sized up by St. Peter.
"Well, Bill, I'm really confused on this call; I'm not sure whether to send you to Heaven or Hell. After all, you enormously helped society by putting a computer in almost every home in America, yet you also created that ghastly Windows '95. I'm going to do something I've never done before in your case; I'm going to let you decide where you want to go."

Bill replied, "Well, what's the difference between the two?"

St. Peter said, "I'm willing to let you visit both places briefly, if it will help your decision."

"Fine, but where should I go first?"

So Bill went to Hell. It was a beautiful, clean, sandy beach with clear waters and lots of bikini-clad women running around, playing in the water, laughing and frolicking about. The sun was shining; the temperature perfect. He was very pleased.

Heaven was a place high in the clouds, with angels drifting about, playing harps and singing. It was nice, but not as enticing as Hell.

Bill thought for a quick minute, and rendered his decision.

So Bill Gates went to Hell.

Two weeks later, St. Peter decided to check on the late billionaire to see how he was doing in Hell. When he got there, he found Bill, shackled to a wall, screaming amongst hot flames in dark caves, being burned and tortured by demons.

"How's everything going?" he asked Bill.

Bill responded, his voice filled with anguish and disappointment, "This is awful! This is nothing like the Hell I visited two weeks ago! I I can't believe this is happening! What happened to that other place, with the beautiful beaches, the scantily-clad women playing in the water?!???"

"That was a demo," replied St. Peter.

God brings Clinton, Yeltsin and Bill Gates to his office and says " Men, I've decided to bring an end to the world this Thursday -- I want you to go back and tell your people."

Upon his return, Clinton holds a press conference and says "People of America, I have good news and bad news. The good news is that all these years we've been saying 'one nation under God' we've been right -- there is a God. The bad news is he is destroying the world on Thursday."

Yeltsin makes an announcement to the Russian people and say "Brave comrads, I have bad news and bad news. The first bad news is that we've been wrong all these years -- there really is a God. The other bad news is he is going to destroy the world on Thursday."

O great Oracle, the one who sees all and knows all, please accept this humble question from thy grovelling supplicant...
Why is Windows so bug-ridden it makes you believe it's still a Beta? And in response, thus spake the Oracle:

THE SCENE: A dark antechamber of the Gates estate, dimly lit by three 20" monitors suspended from the ceiling. In the midle of the room is a Pentium/100 MHz, sheathed in a black casing. Three programmers dance around the machine, chanting horribly. Their pale, clammy complexion is cast hideously by the light of the monitors, rendered even more repugnant to the watchful eye by the 60Hz flicker of the monitors.

Remember, Obsolescence isn't an accident, it's an art form.

You owe the Oracle a signed, handwritten manuscript of MacBeth, and a copy of the Windows upgrade for the P6.

Is Windows a virus?

The picture to the right shows William Gates III eating a

freshly home-made cream-and-lemon pie handed to him
by one of his supporters.

Question: Is Windows a virus?
Answer: No, Windows is not a virus.

Here's what viruses do:

Until this point it seemed Windows is a virus, but we discovered fundamental shortcomings:
Viruses generally are well-supported by their authors, run on most systems of their chosen type, are frequently updated, use program code that is fast, elegant, compact and efficient, and they tend to become more sophisticated as they mature!

These are categorical, but consistent, characteristics of viruses, which are inconsistent with Windows. We must therefore disqualify it.
Win95 is not a virus --- It's a bug.